Snow, ice and frozen pipes: Are you covered? The 6 things every homeowner needs to know 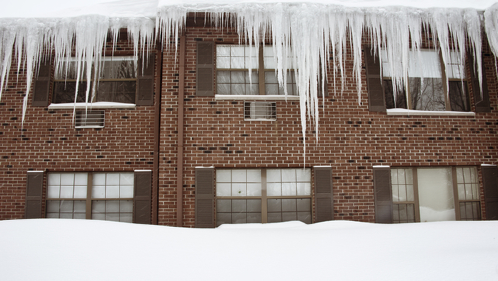 Protecting your property against damage from winter weather.

With most of the United States in a deep freeze and record breaking snow totals in New England, homeowners are beginning to feel like the residents of the fictional kingdom of Arendelle, stuck in eternal winter, as in the Disney movie “Frozen.”
If a foot of snow causes your roof to collapse or if extreme cold temperatures cause your pipes to freeze, will your insurance policy cover the damage? It depends on whether your policy provides coverage for named perils or open perils. Here are some key things to know as you review your policy.
The Insurance Services Office (ISO) standard Homeowners forms and the equivalent American Association of Insurance Services (AAIS) forms list the weight of ice, sleet and snow as named perils–which means that damage from the weight of ice, snow or sleet to a building or property contained in a building is covered. Loss to awnings, fences, patios, pavements, swimming pool, foundations, retaining walls, piers, wharves or docks is excluded.

If personal property inside a building is damaged because the roof caves in under the weight of the snow, then coverage for damage from a collapse is triggered. The weight of ice or snow may cause a roof to sag (which is not considered a “collapse” under the homeowners forms) or gutters to pull away from the roof, leading to damage to personal property, which also would be covered. 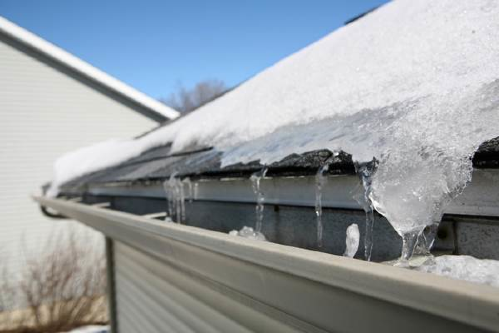 Ice damming—caused by the weight or mass of snow that has compacted and turned to ice—often causes water to back up under shingles or flow under eaves from clogged gutters. If the water stains walls and damages ceilings, there is coverage for the damage to the building because there is no exclusion for thawing. Further, resulting water damage to contents should be covered because the language of the policy covers the weight of the ice, snow or sleet that causes damage. The scope of the coverage may be broadened to the weight of ice as a proximate, not necessarily a direct, cause of loss. 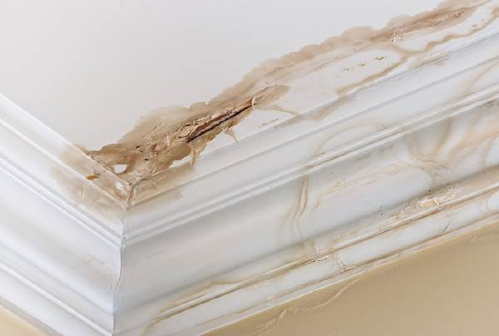 In some cases, the weight of the ice might cause roof or siding shingles to dislocate just enough to allow water to enter the house. If the leak is because the roof or flashing wasn’t installed properly or the roof is worn, your policy may not cover the cost to repair the roof. It may only cover the damage to the interior of the house and contents.
Remember that with named perils coverage, it’s left to the insured to prove that a covered peril was the cause of the loss. If you have a comprehensive homeowners policy instead of a broad form or special form policy, it’s up to the insurer to prove that the loss is excluded. 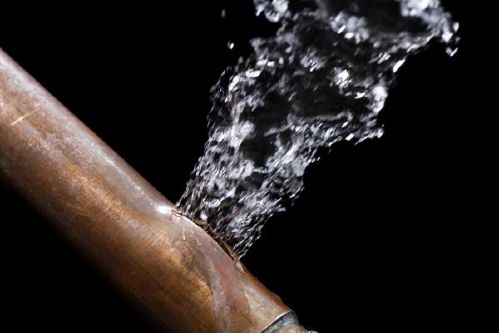 Under the homeowner forms, in all situations—vacant, occupied or unoccupied—there is no coverage for freezing plumbing, heating, air conditioning or automatic fire protection or of a household appliance unless the named insured has taken precautions to maintain heat in the building, or shut off and drained systems and appliances.
This is often a problem with snowbirds who want to save on utility bills while they’re away. Generally keeping a thermostat set at around 55 degrees during the winter months should prevent your pipes from freezing, but the furnace may break down or there may be an extended power failure. If your home is going to be unoccupied for a long time, and you don’t want to keep the heat on, be sure to shut off the water supply and drain the system and appliances of water to avoid frozen pipes. Even better: have someone you trust check on the property, especially when the temperature has been extremely low for several days. 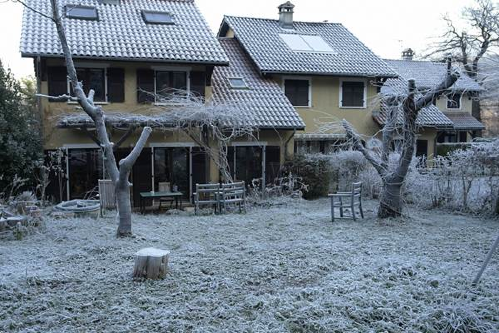 Generally, trees, shrubs, plants and lawns aren’t covered for damage by wind, hail, the weight of ice or snow, or any unnamed peril that would be covered under open perils coverage. If the tree or the branch falls on your house or garage, however, damage to the structure is covered. 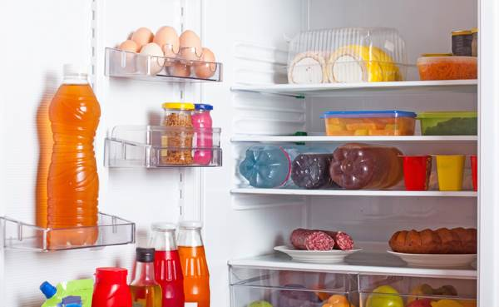 In many parts of the Northeast during the winter of 2014 storms caused power failures that lasted for several days. Your homeowners policy may cover the cost of the food in your refrigerator and freezer, up to certain dollar limits, usually $500.
If you can’t stay in your home because of the power failure, some policies provide coverage for the expenses of a hotel and the cost of meals.
Review your homeowners policy to be sure you understand your coverage, and take precautions. If you can do so safely, shovel large accumulations of snow off your roof and unclog gutters. If you can’t do so yourself, you may be able to find a contractor to remove the snow for you.

Do you have an emergency right now?

Life, Back to Normal Fast®

What Our Customers Are Saying

Melisa did such a great job and was so professional and nice. It really helped with the issues I was dealing with. Thanks Again!

Thank you for everything. You have been more than accommodating to me throughout this nightmare. I couldn’t be more pleased with the final outcome.

I just can’t thank you enough for making our “water damage ordeal” go away so quickly. Your ability to organize subcontractors and the ICC crews is truly amazing, Mom and I are delighted to be back and settled into our little casa. Your genuine warmth and caring are truly gifts that you bring to your work. You are so appreciated!

Thank you for sending Jake to my home. He was the most respectful young man I have ever met. He left my home very clean and he was very knowledgeable.

The project manager did a great job communicating. He was so nice and did a great job checking in with us. Working with ICC was the best part of the flood. The crews really went out of their way to make sure we were well taken care of. The job could not have gone better.

I don’t think your company performed work at Derek’s home as there was minimal damage, he called me today and thanked me profusely for referring ICC to him. He was very impressed with the rep that came to his house and the honesty and helpful advice he gave him about clean up and that it may not be in his best interest to file a claim. He is the type of customer that appreciates good service and will remember it and refer others. Thanks again for ICC’s help.

Thank you for such AMAZING service!

ICC turned a really bad experience into a good one. We are very happy with all of the work that was done. They did a great job explaining the claims process.

The crews were very professional and communicated well. They were great also about cleaning up after themselves. We would use ICC again. The crews were always on top of the process, which allowed the repairs to go smoothly.

Erick did an excellent job explaining the process. We thought that everyone was very professional. They explained everything very well and followed through with everything. Communication could not have been better. I am very happy with my services.

Our project manager was great to work with; he explained things well and answered all of our questions. Our coordinator also did a good job. Working with ICC was easy. Communication was wonderful and the crews were very professional. We would use ICC again in a heartbeat.

The lead technician was great and explained things over the phone very well. I was very impressed. The crews were better than expected and very professional. ICC was extremely responsive; I was out of state and was so impressed with how they kept me informed.

I was very happy with all the crews at ICC. I had great experience and would not hesitate to work with ICC again should the need arise. Everyone there really knows what they are doing.

Dealing with the fire was a very upsetting time. ICC was able to get out to my home quickly and really helped reassure me that everything would be fine. ICC worked very well with my insurance company. I could not have been happier with the whole process. I know I asked a ton of questions and Mark was great about answering them all.

The crews were always on time for their appointments. Our job went very well. I am so thankful for everyone at ICC and the excellent work they did.

Everyone I dealt with was just great. My project could not have gone better. Everyone at ICC is professional and is excellent at communicating. I would use ICC again and will be recommending them.

The technicians did a fantastic job. Everyone really cared about me and my concerns. They were extremely knowledgeable, compassionate, and knew how to make me feel comfortable. ICC was amazing to work with.

ICC was terrific to work with and I will be recommending them. I had an excellent experience.

The technicians were extremely detailed. I immediately felt like I was in great hands. They were also very calming, always on time and communicated well.

The technicians were very good at explaining what was going to take place. They answered all of my questions in great detail. Everyone was very sympathetic to my situation and genuinely cared.

Our project manager payed great attention to detail and had excellent customer service. He was very compassionate and really cared about what we were going through. ICC was wonderful to work with. The crews were very professional and thorough.

I was very pleased with the whole process. Everything went so much smoother than I expected. ICC really helped make it easy.

The crews were very professional and communicated very well. They responded very quickly to our phone calls and always made sure we knew what was going on.

Thank you for the wonderful inspection findings and THANK YOU for your professionalism. So much appreciated.

My project manager did a great job and was really nice to work with. My coordinator did a great job keeping me informed about the process as well. ICC was wonderful to work with; they were all very professional and treated my home well. The quality of the work done was impressive and I would definitely use them again.

I was impressed by the short time it took for the clean up crew to make arrangements to meet me even though we were outside of the metro area.

As the coordinator of facilities and grounds for the State’s fourth largest school district I am involved is a lot of activities and unfortunately some are emergencies in nature. This includes fire, floods, sewer backups and natural disasters. Thankfully this does not happen often but when it does I rely on a restoration company’s specialists who have the knowledge and equipment to quickly clean and restore the affected area of the building or grounds…

Please complete the form below.